Beek’s plans include building on the company’s success in the integration of space and blockchain technologies, expanding product lines and establishing a global headquarters in the U.S.

WASHINGTON, Aug. 3, 2022 /PRNewswire/ — SpaceChain today announced the appointment of Cliff Beek to the role of chief executive officer (CEO) to spearhead global expansion efforts for the space-as-a-service solutions provider. Beek will be responsible for charting the company’s long-term growth and extending its global footprint through leveraging its first-mover leadership position in the integration of space and blockchain technologies, and proven capabilities in its decentralized infrastructure and in-orbit platform. Co-founders Zee Zheng will assume the role and responsibilities of executive chairman upon transition while Jeff Garzik remains as the company’s chief technology officer (CTO). 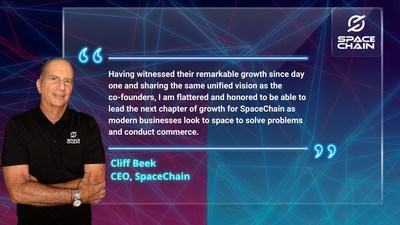 Beek is an accomplished executive with over 25 years of professional experience in providing leadership and strategic direction to progressive technology companies, with expertise across managing equity-backed enterprises, particularly those in the aerospace, cybersecurity, defense intelligence and cloud infrastructure sectors. Most recently, he was president and CEO of Cloud Constellation Corporation, a Los Angeles based company that developed the first global satellite data security platform for governments and financial institutions.

Beek’s immediate priorities for SpaceChain include building on the company’s success and industry-leading position in integrating software-defined payloads to advance blockchain applications in orbit, as well as raising awareness and capital in the United States (U.S.) through targeting private equity investors and strategic vendors that have an affinity to space, blockchain and fintech.

A new global headquarters will be established in the U.S. to accelerate global expansion and complement SpaceChain’s existing regional operations in Singapore, the United Arab Emirates (UAE) and United Kingdom (UK). Possible locations for the global headquarters include Washington, D.C., San Francisco and New York City. Beek sees enormous potential in the geographical regions SpaceChain is currently operating in, and across the U.S. where he plans to foster dialogue and relationships with industry participants, and develop the company’s strategic growth.

In addition, Beek plans to expand SpaceChain’s product line and unique offerings over the coming months, through reinforcing the company’s proven capabilities in customizing space nodes for secure custody, smart contract and digital asset transactions; and working closely with manufacturers and developers to design and integrate blockchain-enabled payloads onto satellite constellations.

“Having witnessed their remarkable growth since day one and sharing the same unified vision as the co-founders, I am flattered and honored to be able to lead the next chapter of growth for SpaceChain as modern businesses look to space to solve problems and conduct commerce,” said Cliff Beek. “I am looking forward to strengthening SpaceChain’s legacy and hallmark as the partner of choice among enterprises that are looking to leverage space as a platform for business innovation and unfair advantage.”

“Cliff’s extensive leadership experience and illustrious career at high-growth corporations makes him the ideal candidate to take on the CEO role as SpaceChain enters a new phase of growth and development,” said Zee Zheng, SpaceChain co-founder and executive chairman. “His global experience and multicultural background in problem solving will prove valuable as he takes SpaceChain to the next level.”